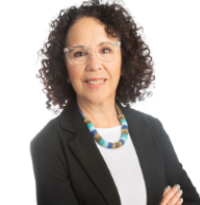 Originally from New York, Robin relocated to Scottsdale in 1991 with her husband Cliff. Robin grew up on Long Island, and lived in Manhattan for eight years after college. Robin & Cliff have been married for over 22 years and have two daughters, Elana and Alexa, both born in Scottsdale. Robin’s and her family have grown “Jewishly” with their children through Jewish pre-school, religious school, bat mitzvah, Confirmation, Hebrew High, summer camp and the NFTY EIE High School in Israel program, which they have both attended. They have been members of CBI since 1999 and have participated in the various volunteer opportunities offered at CBI including, Mitzvah Day and the Thanksgiving meal program. Robin has also served as a member of the Religious School Committee and the Camp Daisy and Harry Stein Camp Committee.

Robin holds a BS in Finance from the University of Buffalo and a Masters in Organizational Leadership from the University of Phoenix. She has worked in the Fast Moving Consumer Goods industry for the past 30 years, 22 years at Henkel Consumer Goods Inc. (acquired The Dial Corporation). She is currently the Vice President of Supply Chain Planning for North America.
She is a past Board member for the Leader to Leader Institute, Peter Drucker Institute for Non-Profit Leadership in New York (2009- 2011) and participated in various community activities including the United Way and the Crohns and Colitis Foundation. In her spare time, she enjoys tennis, yoga, travel, interior design, and keeping up with her daughters.