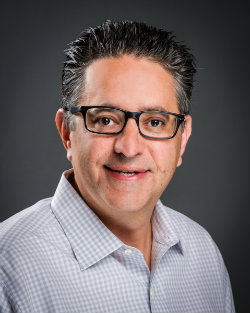 Rabbi Stephen Kahn was born in San Francisco, California. After receiving his B.A. in Politics from the University of California, Santa Cruz, Rabbi Kahn attended the Hebrew Union College-Jewish Institute of Religion where he was ordained as a rabbi in 1995. He became Senior Rabbi of Congregation Beth Israel in July of 2003.

Rabbi Kahn’s passion for Jewish education, youth work and his dedication for creating an inner generational congregation has guided him throughout his years in the rabbinate. He believes that in order to create a “Kehilah Kedosha,” – “A Sacred Community,” that our members must become fully integrated into all aspects of congregational life. Rabbi Kahn has made personal accessibility and individual connection a critical aspect of his rabbinate.

In addition to his rabbinic duties at the Congregation, Rabbi Kahn is a member on the regional board of the Anti Defamation League (ADL). Rabbi Kahn has three children, Ethan, Gabrielle and Isabelle.