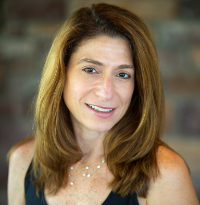 Laura is a native of Phoenix, was consecrated and became a Bat Mitzvah at CBI as well as was a perennial camper at Camp Charles Pearlstein. Following her formal Jewish education at the CBI Religious School, Laura continued at Hebrew High School and the Alexander Muss High School Program in Israel.

Laura holds degrees from the U of A in Organizational Psychology and Human Resources & Management Information Systems. Her professional career included over 10 years at Accenture (a management consultancy) where her most notable role was the North America director of the alliance with Microsoft. She also spent three years at TechBridge, an Atlanta-based non-profit organization, where she served as director of the company’s annual fundraising gala.

Laura is married to John Henderson, who is actively involved with musical programs at CBI. They have 2 children, Max and Zoe. Max is a Camp Stein camper and Zoe is eager to go when she’s old enough. Both kids are proud graduates of Chanen Preschool and attend Haberkorn Religious School.

Laura loves Judaism and the sense of community among CBI, her friends and Camp. She finds great joy from raising her family in this community and sharing the memories and traditions. She looks forward to preserving the CBI community and to cultivating the CBI future.