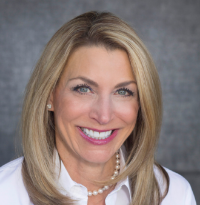 Jacki grew up in Phoenix and her family has been a part of the CBI community since 1971. Jacki went to religious and hebrew school at the Osborn location and was Bat Mitzvahed there. Jacki’s involvement with CBI grew as she had her own family. Over the last 20 years, Jacki has been involved with many aspects of CBI including preschool, religious school, sisterhood, camp, welcome home project, chair of the simcha team, co-chair for 3 galas, museum, sanctuary renovation, and budget committees. She also participates in the mentor program for B’nei Mitzvah. Jacki was awarded the Amdur award for volunteerism in 2011. She served on the board of directors for 5 years and is currently serving on the executive committee as secretary.

Jacki was the southwest division buyer for Dillard’s departments store for 8 years. Buying men’s designer sportswear for 35 stores in 5 states.
Jacki received her Bachelor of Science degree in marketing from the W. P. Carey School of Business at Arizona State University and is now a fused glass artist and owner of Jacki Cohen Glass Art Designs, LLC.  The art of fused glass has been a passion for Jacki for the past eight years. Her most successful and preferred method is creating a custom designed piece for a client. She creates functional and decorative contemporary home décor including cabinet knobs and drawer pulls. She also has a special collection of Judaica artwork.
Jacki created the piece currently in the CBI rotunda framing the endowment donors.

Her husband, Lance is also very connected to CBI life including search committees, Kahn classic, and attends adult education regularly.
She has two college aged children, a son, Randy, and daughter, Maddie that grew up at CBI. Both children are graduates of Chanen preschool. Had their Bar/Bar mitzvah and were confirmed, Camp Stein kids, BITY presidents, and madrichim.