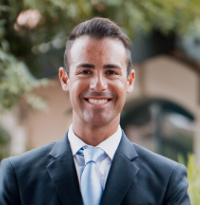 David Carey Shapiro is the founder of his own law firm located in Scottsdale, Arizona – David Shapiro Law, PLLC. Providing dedicated representation to clients throughout the Phoenix metropolitan area, David focuses his practice exclusively on plaintiff’s personal injury and wrongful death litigation, assisting people who have suffered losses due to the negligence of other parties. The types of cases that Mr. Shapiro has handled have involved surgical errors and other forms of medical malpractice, defective products, burn injuries, premises liability and motor vehicle accidents. Throughout his career, David has been instrumental in obtaining numerous multimillion-dollar settlements and jury awards on behalf of his clients.

A Scottsdale native, David attended The University of Arizona as an undergraduate, receiving a Bachelor of Arts cum laude in 2007. He also obtained a certificate in entrepreneurship from the school’s McGuire Center for Entrepreneurship. David then went on to attend the Sandra Day O’Connor College of Law at Arizona State University, where he participated in its criminal practice clinic and served clerkships with judges on the Superior Court of Arizona in Maricopa County before being awarded his Juris Doctor in 2010. Admitted to practice before all Arizona state courts, David is also admitted to practice before the U.S. District Court for the District of Arizona.

In order to stay abreast of current developments in wrongful death and personal injury litigation, David is an active participant in several professional organizations. His memberships include the Arizona Association for Justice, the Maricopa County Bar Association, the American Association for Justice and the Attorneys Information Exchange Group. David is also active in his community, donating his time to Little Pink Houses of Hope, a nonprofit organization that provides free week-long retreats to breast cancer patients and their families and other charitable Jewish causes such as the Jewish Federation of Greater Phoenix and the Jewish National Fund.  David and his family have been members of Congregation Beth Israel for over fifty (50) years.