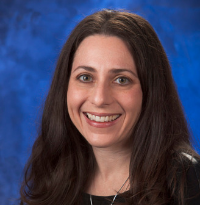 Jessica grew up as a member of Congregation Beth Israel (CBI), became a Bat Mitzvah and was confirmed at the Osborn Street location. She and her family have been active members of CBI since returning to Arizona in 2007.

Jessica follows a long family tradition of serving the CBI community. She is the fourth generation of her family to serve on the CBI board. In addition to being a board member, Jessica is co-chair of the Chanen Preschool Committee and served on the Preschool Director search committee.

Jessica holds a BA from Oberlin College and a PhD from Johns Hopkins University. She is a principal scientist at the Banner Alzheimer’s Institute in Phoenix and associate director of the Alzheimer’s Prevention Initiative program. She is a member of several scientific advisory boards for national and international programs.

Jessica lives in Scottsdale with her husband, Kevin, and two children, Nicole and Seth. Both children are graduates of the Chanen Preschool, are Haberkorn Religious School students and members of the Zimriyah junior choir. Nicole also is a Camp Stein camper and ITTY BITY member.